In October 2012 the BBC broadcast a 2-part series by Evan Davis entitled ‘Built in Britain’ http://www.bbc.co.uk/programmes/b01nd290.

In these programmes Evan explored the potential for major infrastructure projects to act as a catalyst for reinvigorating the UK economy. In part 2, the story focused on two major projects; the high speed rail link between St Pancras /Channel Tunnel and the 2012 Olympic Park. The projects and the potential economic impact were very interesting.

The programme explored the reasons for the success of these two projects and sought to explain the reasons for our ‘new found ability to deliver complex projects successfully’. In addition to funding and engineering excellence, key project people identified a significant reason for the success of these projects in comparison to previous experiences was the contractual relationships set-up; which really encouraged people to work together – a very practical demonstration of the power of collaboration. 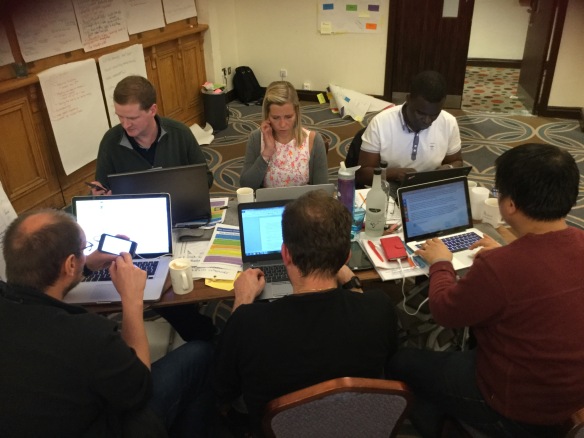 This is music to the ears. For many years I have worked with projects, engineering, construction and business change projects. In my experience the most successful projects emerge when project teams really do work together and engage their stakeholders effectively.

The Project Director inherited a global business change project that had experienced two previous false starts. The Director instigated monthly, off-site, facilitated workshops which meant from the beginning of the project all the stakeholders in the project got together to set expectations, reviewed progress and sorted out challenges that were being faced. By doing this they really pulled together.

Many business change projects incorporating new IT and the solutions need to be rolled out across numerous business units in the country.  For one organisation they made a significant step towards collaboration by arranging a short sequence of facilitated project launch workshops .

During these different workshops the facilitators focused on providing processes that enabled participants to absolutely engage in the highly uncertain situations.

These workshops went much further than the traditional project kick-off meetings where PowerPoint slides are shown and contact details are exchanged. In these facilitated workshops differing viewpoints and perspectives at the start of the project were seen as enriching the process. Through a series of professionally facilitated steps, all participants were able to share, explore and ultimately shape their projects. This led to true collaboration.

Just as in the recent infrastructure projects described in the Evan Davis programme, these business change projects were all delivered very successfully.

Perhaps the evidence points to an emergent clue – the key that unlocks a stream of successful projects – true collaboration requires time together to build trust and engagement
Talk to us about how we can help you to set up early project team engagement sessions  info@centreforfacilitation.co.uk

1 thought on “Collaboration: The Key to Project Success?”